VirtualBox is a more well-known options for emulation of operating systems in virtual machines. With it you can run a system within another, like Ubuntu (or any other Linux distribution) on a Windows PC or Mac, and vice versa.

Touches in the interface

If you have used other versions of VirtualBox, right off the bat will notice that the interface of the program won a few touch-ups and now displays complete information about the virtual machines that exist in the application. In addition to technical data, which help the user to learn about system settings, the program also displays a thumbnail preview.

The thumbnail will have great utility for multiple virtual machines running, because it helps prevent processes from being terminated by mistake. These two novelties, easier to notice an initial look shows that the item has been treated with practicality fondness for Oracle developers. 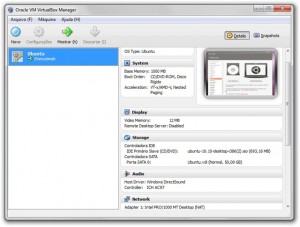 Finally the VirtualBox works with USB 2.0 standard, which allows greater speed in data transmission. A good choice for when you’re sending or receiving data from a flash drive or any other storage device via USB. For the virtual machine recognize the computer USB inputs, just enable this option in the settings of the program.

Another innovation that influences directly on the performance of the operating system run from VirtualBox 4 is the amount of RAM reserved for him. Previous versions allowed the use of a maximum of 2 GB of RAM, even though the computer owned more. Because now this figure has been enhanced and it is possible to set more memory space to be used exclusively by the virtual machine.

When you use the VirtualBox, you need to create a virtual hard disk that will store the data of the system. The formats used by this application are and VHD VDI and when you configure a new you can set its size as expandable, i.e. will grow as needed.

However, if you need to free up space, the process to resize these virtual disks was somewhat laborious and “off the record”, i.e. it was necessary to do some “hacks” for this. The new VirtualBox solved this problem with a native resource for resizing of the VDI files and VHD.

Another new feature of VirtualBox 4 is the 3D acceleration, another factor that should streamline even more the use of any operating systems inside virtual machine. It has been found that in the Beta version of the program this feature does not work on Windows XP 64-bit.