Rumors about the death of the iPod shuffle are greatly exaggerated

Rumors about the death of the iPod shuffle are greatly exaggerated 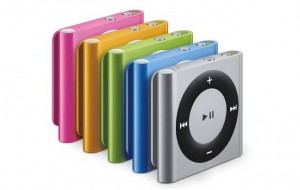 Apple is not going to close the line of iPod shuffle, and the shortage of the devices to the Apple Store and online store due to the change of supplier parts. This is with reference to the “reliable source” told the Saturday edition of the Billboard.

“This is not about ending the production of iPod shuffle. As our source familiar with the matter, Apple is currently at the stage of changing supplier of components, which led to the failure of these devices, “the Billboard reports.

On Thursday, it became known that the delivery time of your iPod shuffle at the Apple Online Store suddenly increased to 7-10 business days. At the same time guide the administrators warned the retail Apple Store about the deficiency of mini-players. Shoppers in retail stores recommended Guide for orders in the company’s online store. All this has given rise to rumors about the death of the iPod shuffle.

Last fall, Apple discontinued the production of another model, the iPod Classic, manufactured from 2006 onwards. Apple CEO explained that the main reason for the failure of the further production of the gadget has become inadequate for the production of parts that the company has not been able to find anywhere else in the world.

The iPod shuffle is the smallest player in the iPod lineup, last updated in 2010 year. The gadget is less than the previous model and has received what has been missing is the predecessor of the button. Initially, the player was introduced in five colors-silver, green, blue, Orange and pink, but in 2012 year Apple changed the color scheme, which is now presented modifications in silver, gray, green, blue, pink, yellow and purple versions.

49-dollar iPod shuffle has gained popularity for a wide audience of users for its compact size and low cost.